Teaching Math And Science With Music

What are the benefits of her unique book? Dr. Frank has taken an average math student and put them on the mathematics honor roll!

Dr. Madeline Frank cites scientific evidence showing that the study of musical instruments helps to develop strong neuronal connections to enhance brain function; perfect for teaching math skills! She cites studies from such scholars as Arnold Scheibel, Gerald Edelman, Oliver Sacks, Alfred Tomatis and others. Discover how you too can be brighter through music. Read More

Dr. Frank has developed her unique, one of a kind, math to rhythm program for children!

Her oldest son was not doing well in math. His math book had eight different authors and each page contained eight different math teaching concepts. She decided to simplify this to only one math concept per page. Children learn concepts one at a time and build on this foundation. Her children have always enjoyed music and what makes music special is the rhythm. Read More

What Readers Are Saying

Congratulations on the Ten-Year Anniversary of your Musical Radio Show and Eleven-Year Anniversary of your Musical Tips! Quite the milestones! You’ve covered an amazing amount of material during those years, and given thousands of interested educators and friends musical food for thought! I know I’ve learned a lot. One of the most wonderful things to see in all of the reports you’ve provided is the strong sense of responsibility exhibited by the people you “interview” from history. I hope you will have many more years, and profit many additional people with your factual accounts.  Many Happy Returns! Warmest regards – Elizabeth Hamilton

“Thank you for sharing Madeline –  I found that very relaxing to read. I look forward to being more constructive. There was also a great deal of information I would have missed had I not listened. You have a way of clearly making a bold emphasis and making me question the ends of statements, with a great deal of accentuation to focus on for critical thinking. I would like to think I am learning from it.”  –  George Snow

We’re honoring Top Teachers, Lifetime Achievement Awards for teachers, Top Graduating High School Seniors, and Top University Graduates. The Nobel Prize never honored teachers so we are doing this. In a sense, this is our “Nobel Prize” for hard-working teachers and hard-working students.

Madeline Frank received her Bachelor of Music and Master of Music from the Juilliard School in New York City as a scholarship student of William Lincer, former principal violist of the N.Y. Philharmonic and the Cleveland Orchestra. While attending the Juilliard School, she studied symphonic conducting with Maestro Vincent La Selva, Principal Conductor of New York Grand Opera Company, New York City Opera, the Opera Company of Boston and many international orchestras. Read More!

Madeline Frank, an international violist, has performed concerts throughout the United States, Europe, Asia, South America, Australia and New Zealand to critical acclaim. She has performed at the prestigious Purcell Room at the Royal Festival Hall in London and recently performed the “premier” of the Walton Viola Concerto with the Xiamen Philharmonic Orchestra in Xiamen, China. She was the “first American”, “first woman” and the” first violist” to perform in Xiamen, China. Read More!

Dr. Madeline Frank profiles historical and contemporary icons that made music a part of their everyday life. Learn how music impacted their learning and helped shape the people that became. Live interviews and compelling insights await! Listen Now! 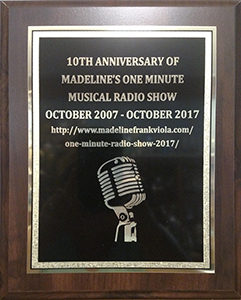 "Fascinating interview with Morgan Irons. She is a star on earth and in space. Congrats on a splendid interview." "...I love your site and "One Minute" educational info as well as your interviews and musical ability." - Barbara S.